Thank you for your interest in this trip. If you want to revisit this page, use the QR-code shown or use the following link: http://www.itravel.com/select/5981-individual-azores-island-hopping-the-highlights-of-the-islands

Individual Azores island hopping - The highlights of the islands 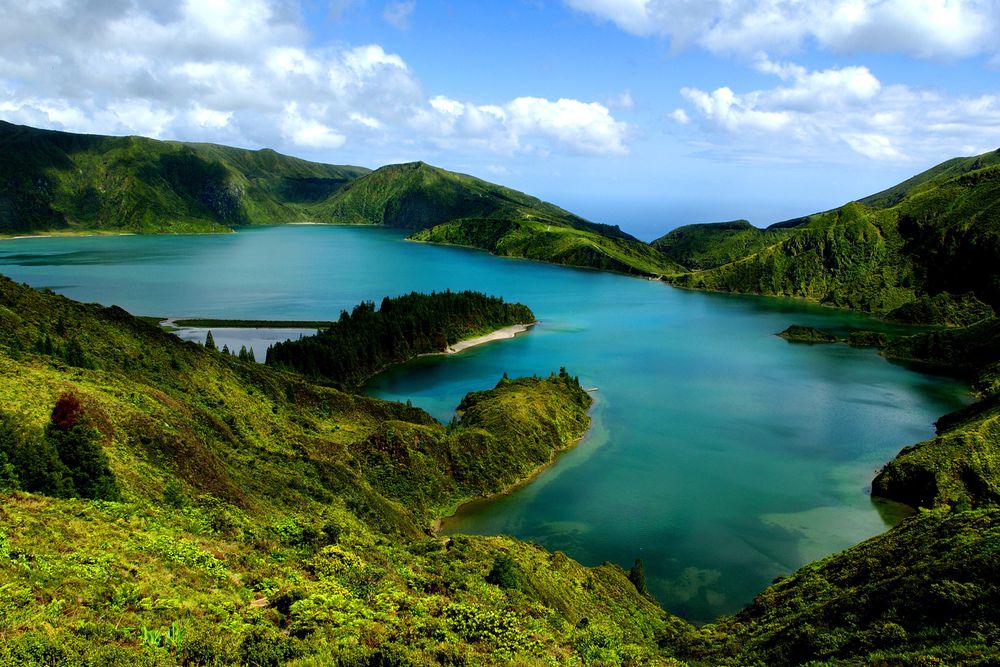 Green hills and blue sea - a unique natural scenery awaits you in the Azores! Lagoa do Fogo will captivate you with its unique color change from deep blue to emerald green. 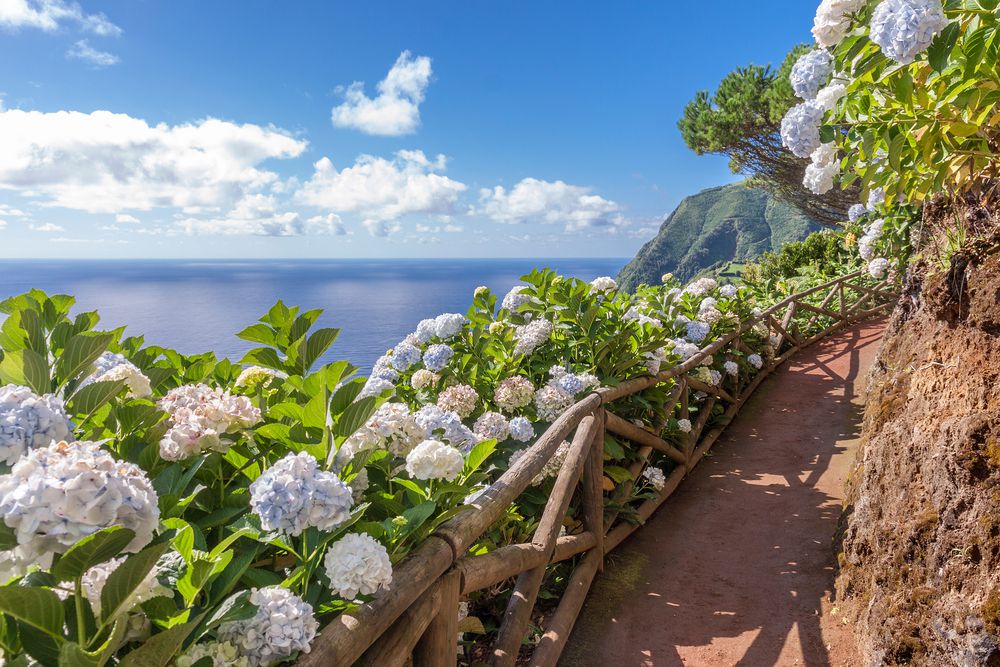 Take a walk and discover the picturesque landscape of the Azores. It bubbles, steams and hisses - get to know the somewhat different side of the Azores! Put on your walking shoes and explore the lush green nature of Terceira. 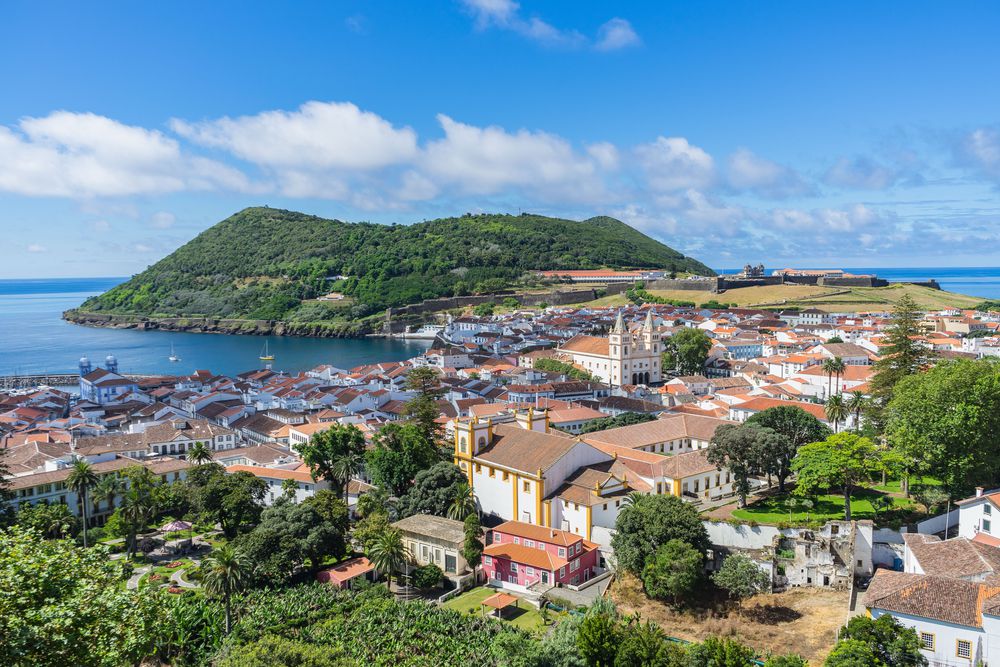 Let your eyes wander over the island of Terceira. 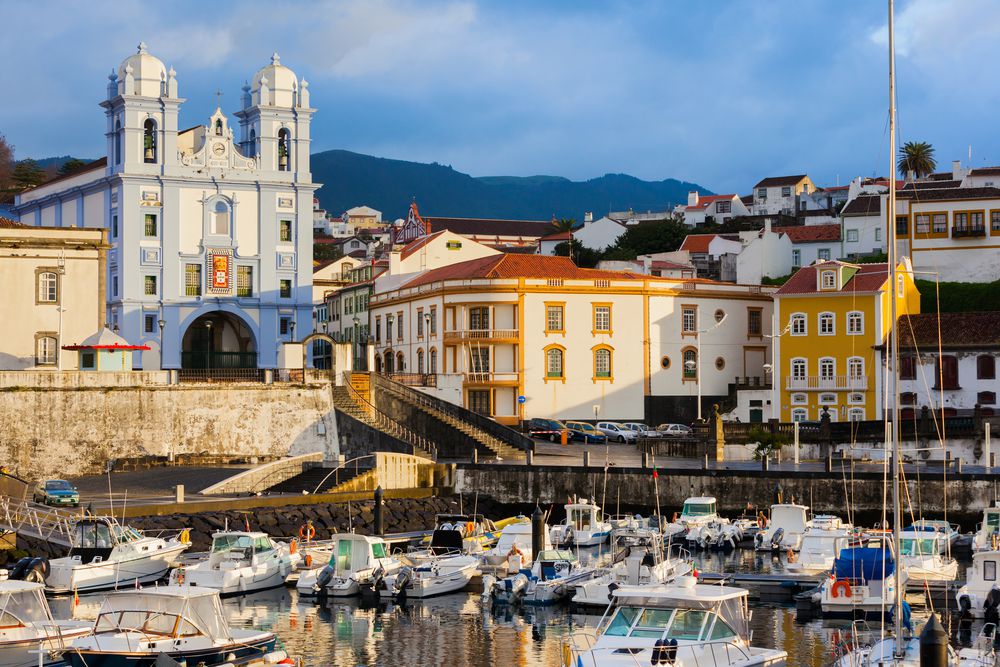 Renaissance buildings and manor houses characterize the townscape of Terceira. 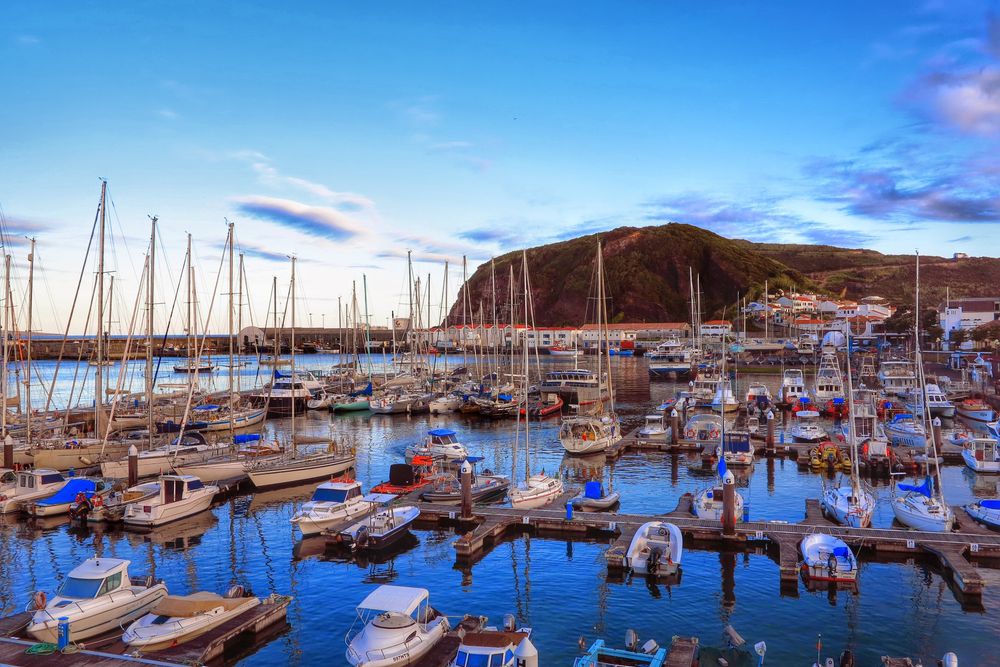 Horta, the capital of Terceira, is a popular meeting place for ocean sailors. 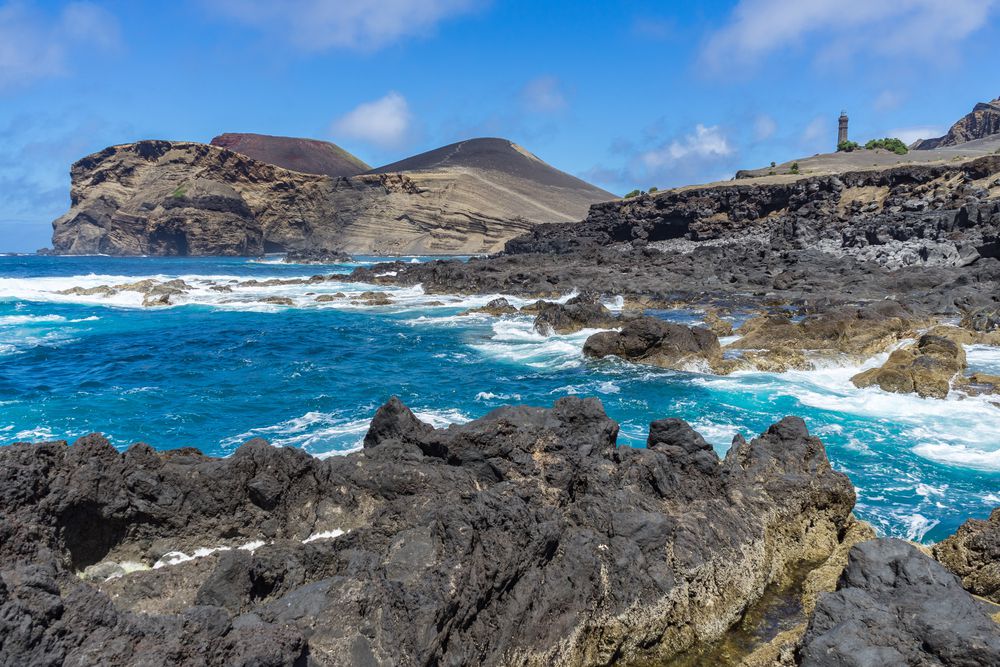 The Capelinhos Volcano is a true highlight of Faial. Enjoy this dreamy panorama of the second largest island of the Azores, Pico. 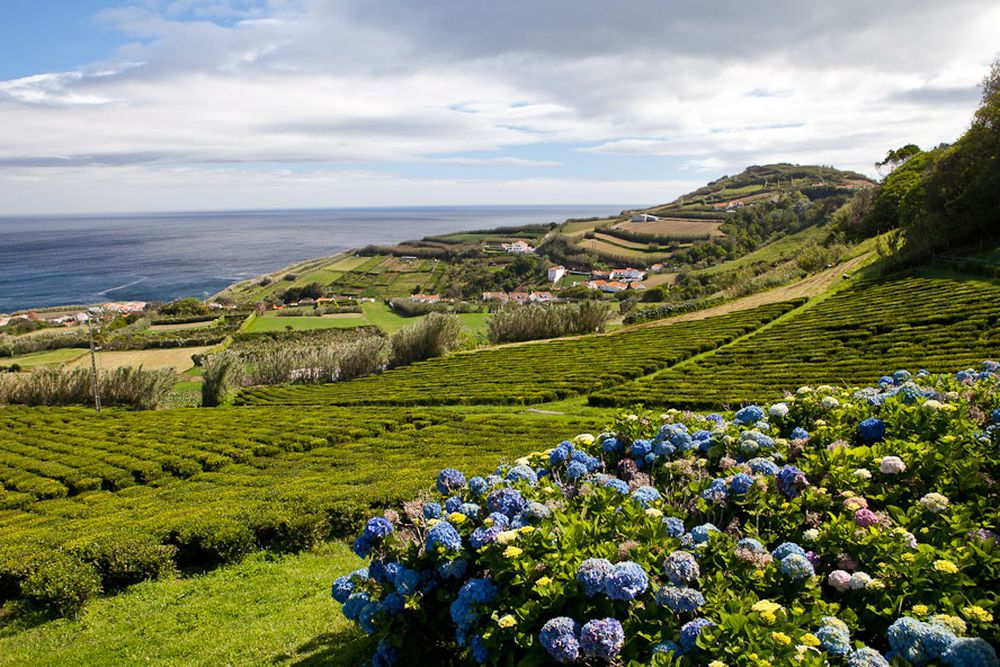 Capture this beautiful view for eternity. With a little luck, you will get up close to whales and dolphins on an exciting whale watching tour.

A paradise rises in the middle of the Atlantic: picturesque bays, idyllic harbor towns, dark blue lakes and mystical volcanoes as far as the eye can see. The gorgeous nine volcanic islands are only two hours away from Lisbon and are known for their unique nature and Portuguese lifestyle. The Azores are considered the perfect vacation destination and promise an unforgettable time away from mass tourism. On this individual Azores island hopping, you can expect an incomparable landscape coupled with local friendliness as well as traditional customs.

We recommend a trip to the Azores from June to October. July and August make up the high season and offer the most hours of sunshine. In addition, rainfall is rare at this time.

After your arrival on the "Ilha Verde", the green island, you will pick up your rental car and make your way to the 4-star hotel where you will spend the first two days. The island impresses with its unique flora: Besides native plants, there are also many with subtropical origin, introduced by seafarers.

The diversity of São Miguel makes it an ideal place for a first acquaintance with the archipelago. Laid-back friendly people, vibrant nature and volcanic forces await you during the coming week.

The Lagoa do Fogo (Lake/Lagoon of Fire) crater lake is located at an altitude of 600 meters and enchants with its unique color changes from deep blue to emerald green. The highest inland water on the island and its lush shores are a must see. Hot and steaming springs can be discovered in idyllic Furnas. The town is located in a collapse crater and is famous for the national dish, Cozido. The inhabitants cook this typical meal in the springs, which is still prepared according to a millennia-old recipe. This meat and vegetable stew is cooked in the hot springs underground for 6 to 7 hours. You are cordially invited to this "cozido" meal (includes soup, cozido, water, soft drinks, house wine, coffee and Azorean pineapple for dessert). Afterwards, you can stroll through the Terra Nostra botanical garden (entrance fee included).

Day 3: From São Miguel to Terceira - a kaleidoscope of shapes and colors

After dropping off your rental car, you will fly today to the island of Terceira - also called the "Third". You will receive the flight tickets in advance with your travel documents. A new vehicle will be ready for you on the island. 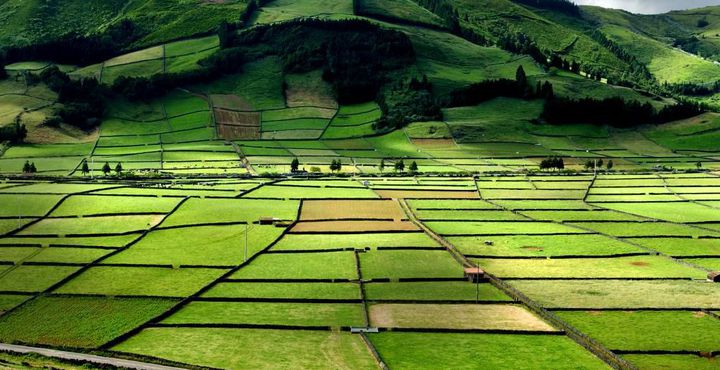 Terceira fascinates with its historical Renaissance buildings and manor houses, most of which are from the 17th and 18th centuries. Unique grottos and caves, formed by escaping gas bubbles and solidified lava masses, invite you to discover them. Beautiful beaches can be found especially around the town of Praia in the east of the island. The rough, wildly romantic coastal area contrasts with the lush green nature in the interior. From the top of the numerous craters, there are breathtaking panoramic views over the island and bays. Your hotel today is the Terceira Mar.

Design the day according to your wishes. Here are a couple of suggestions:

About 100 meters underground is the volcanic vent Algar do Carvão. Inside, the cave impresses with stalagtites and stalagmites made of solidified lava rock, formed more than 2000 years ago. At the end of the cave is a lake with crystal clear water. When the sunlight reaches deep into the vent in the afternoon, the colorfulness of the mosses and lichens around the lake offers a special spectacle (entrance fee optional).

The picturesque old town of Angra do Heroísmo, the main town on the island, was declared a UNESCO World Heritage Site in 1983 and is well worth a visit. Angra, with its elegant facades and colorful houses, is rightly considered the most beautiful of the island's towns.

Day 5: From Terceira to Faial - Gentle Giants of the Seas on Faial

After dropping off your rental car, today you will fly to the island of Faial, which offers a wonderful view of the neighboring island of Pico. With your new rental car, you will explore the interior of the "Ilha Azul" (“Blue Island”). The blue of the ocean and the green of the pastures are the prevalent colors in Faial. On the coast, steep rocky coves alternate with beautiful azure sandy bays, inviting you to sunbathe and swim. The lively capital of Horta was once an important port between Europe and America; it is now a mandatory stop and meeting point for ocean sailors. On a whale excursion (included) you will get very close to the impressive animals. These excursions are especially popular in the Azores, because the archipelago is considered the best place to observe these fascinating animals up close in the wild. During this unique activity, you will see some of the 20 different whale species. 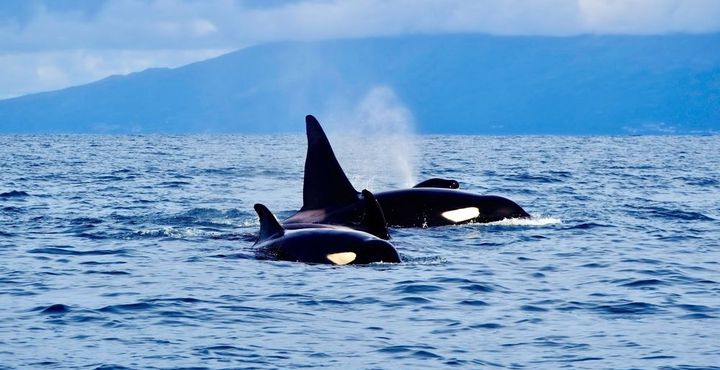 Pico, the volcanic wine island, is just a 30-minute boat trip away from Faial. Take the opportunity and visit the second largest island of the Azores, which boasts unspoiled nature on land and water. Since you cannot take your rental car with you on the ferry, enjoy a full day island tour in a cab on Pico, which is included in the price. This way you get flexibility and have the chance to discover the island with its deep black rock, taste the typical sweet dessert wine Verdelho and, with some luck, you will see whales and dolphins circling the island.

On Pico, you will find entires villages with houses built from black stone with doors and window frames built from lava rock. In the afternoon, you will return by ferry from the "Montanha do Pico" to your hotel on Faial.

Duration of the ferry crossing Faial - Pico: about 30 minutes. 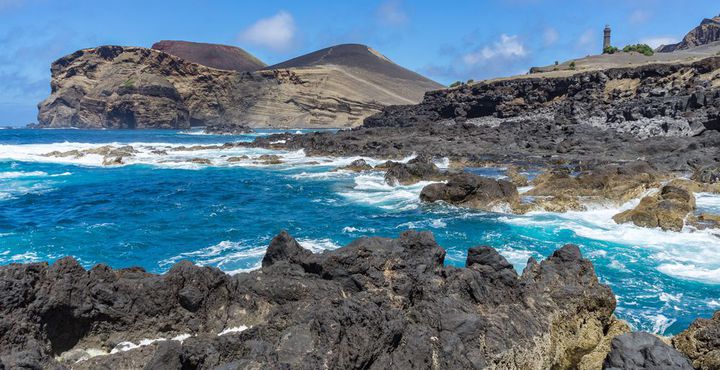 If you still have some time, you should definitely visit the Capelinhos volcano after breakfast, which rose from the Atlantic Ocean by an eruption in 1957 and has grown together with the mainland of Faial. The clash of two forces of nature, fire and water, still fascinates today. Since the eruption, the western tip of the Azores island resembles a bizarre lunar landscape. The lighthouse, which was badly damaged at the time, is one of the main attractions today. See how the waves of the Atlantic break on the black volcanic rock of the island. After dropping off your rental car, fly to São Miguel, where you will spend the last night at the Hotel do Colégio. The latest possible flight will be booked for you. Upon arrival on São Miguel, you will transfer on your own by cab (not included; there are always enough cabs waiting in front of the airport building) to the old familiar hotel.

Today is time to say goodbye. You will start your flight back home and leave the colorful paradise in the middle of the Atlantic Ocean. You can order a cab for the trip to the airport at the hotel reception (not included). We hope you had a wonderful vacation and your suitcases are full of magical memories from this great island experience.

In the historic center of Ponta Delgada, Hotel Talisman blends perfectly into the cityscape. In an 18th century building surrounded by churches, museums, the landmark Portas de Cidade, the hotel is within walking distance of the most popular attractions.

The 57 rooms, each 20 square meters, are spread over five floors and feature amenities like double beds, air-conditioning, free WIFI, cable TV, a telephone, a minibar, a safe, and an electric kettle.

There are few more unusual accommodations than this hotel in a castle dating back to 1555. Perched on a cliff with spectacular views, the castle impresses with its unique history. Today, the castle is a UNESCO World Heritage Site and welcomes its guests with a modern interior, two pools and restaurants that will spoil you with culinary delights.

The rooms have double beds, LCD TV, a safe, a minibar, air conditioning and a telephone.

Hotel Azoris Faial Garden is the perfect concept for those who want to spend their vacation with the highest level of relaxation and tranquility. With an indescribable view of the Atlantic Ocean and the view of Pico Mountain, you will be welcomed. 131 rooms, of which 99 are standard rooms, two pools, a Jacuzzi, a sauna, a Turkish bath and sports facilities such as a tennis court and volleyball courts.

4 islands in 1 week: São Miguel, Terceira, Faial and Pico
This trip is customizable to fit your needs
Prices Make An Enquiry 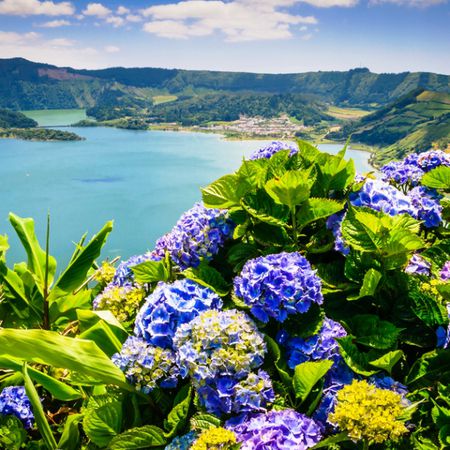 Azores - the evergreen islands in the Atlantic Ocean

Would you like to explore the Azores setting your own pace with the autonomy and convenience... Levada of the 25 Springs & Risco Waterfall

On this hike, you will experience a real masterpiece of nature! Moss-covered paths, endemic...